When it comes to fertilizer placement with wheat, canola, soybeans and other crops seeded with an air drill, it seems like there is a never-ending stream of information as to where, when and how the fertilizer should be placed. Fertilizing your crops is certainly an investment, and you need to do it right to ensure you are maximizing profits. A successful nitrogen program feeds the crop at the later stages of growth to maximize yields. However, if done improperly, the fertilizer will feed your crops too early and will only add to the vegetative growth of the plant with no nitrogen remaining to add yield and/or protein during the critical later growth stages. Even more, if the nitrogen is placed too closely to the seed, it can be toxic to the emerging seedling. 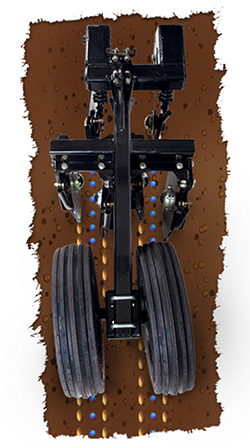 Placing the nitrogen exactly where the plant roots can get to it and exactly when the plant needs it is a challenge many producers face. Engineers at Concord have determined an ideal solution is 6”/9” row spacing with mid-row banders between the six-inch rows. This configuration, which can be found on Concord's Single Disc Drill, can be used to place nitrogen fertilizer only three inches from each row and up to 1.5 inches below the seed. Years of research and field testing have shown that banding the nitrogen in this precise manner puts it exactly where it needs to be to “feed the seeds and not the weeds.” In fact, it has been so reliable that many Concord customers are able to band all their nitrogen fertilizer needs at planting. Some of these customers are often found at the top of high-yield contest results.

On the other hand, most other single disc drills on the market only have ten-inch row spacing. When equipped with mid-row banders, the fertilizer is placed five inches from the seed, severely diminishing the availability of the fertilizer to the plant roots during the critical growth window. Such a costly mistake could mean the difference between average and record yields.

One reason the Concord Single Disc Drill is able to offer such narrow spacing is the single-rank design. Competitive equipment that uses two ranks of openers can run into trouble on turns or hillsides. The rear rank may drift, resulting in seeds placed on or near the fertilizer band and potentially damaging the seedlings.

Another challenge when applying nitrogen is ensuring that anhydrous ammonia doesn’t escape the soil. The downfall with most single disc drills is that the opening discs simply cut a slot in the ground and do not move enough dirt to properly cover the anhydrous with soil. Anhydrous needs to attach itself to soil particles in order to stay fixed in the ground. When it’s covered up with straw instead of soil, which often happens with competitive drills in no-till conditions, producers are much more likely to lose nitrogen. 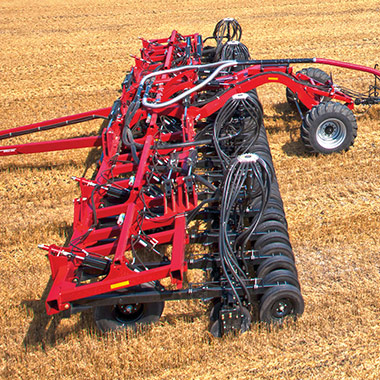 The Concord Single Disc Drill, however, features mid-row banders placed ahead of the opening discs. Also, the opening discs on Concord's Single Disc Drill are designed to move more soil than competitive systems to effectively cover up the anhydrous with soil — not straw. Rear packer tires then firm and level the soil over the seed and fertilizer furrows to properly fix and seal the anhydrous in the ground. With the Concord Single Disc drill, it’s common for customers to comfortably apply 120 pounds of actual nitrogen per acre using anhydrous, whereas competitive drills have difficulty keeping more than 50 to 100 pounds of nitrogen in the ground.